One of the things I dislike about using crankbaits
is how to manage all of those hooks.
It seems I spent more time untangling baits, than fishing.
Until now. 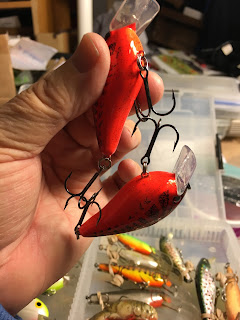 I've tried so many crankbait boxes.
The dedicated crankbait boxes work OK
for separating some of the baits,
but even then the hooks go under the slats
and so it's hard to just grab one and go.
I've tried boxes where you put one bait per slot.
No good. It takes too much space
in the boat to carry so many boxes.

It gets even worse for big cranks.
This box takes up so much space.
So it was back to trying
to use the dedicated crankbait boxes.


Another method I tried was using hook bonnets.
As you can see below, they solve part of the problem,
but not the space issue. 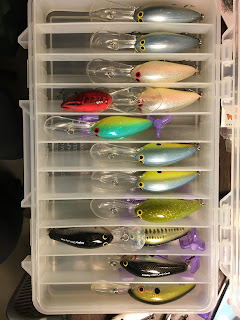 And baits with hook bonnets
need more space than without.
Previously, I bought quite a few specialty
crankbait boxes. That helped,
but I still had to carry
way more boxes than I wanted. 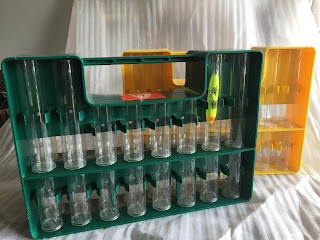 Then I saw a video online about
how someone had put a bunch
of small cranks in a little round container.
I didn't care for the container,
but the elastic band was a brilliant idea.
So, I borrowed the idea and made my own modifications.
As you can see,
when you wrap an elastic band
around the hooks, they won't tangle.
But they still take up too much space.
Then it hit me —
the elastic bands do a great job
of keeping the hooks from tangling —
so I don't need all those slots.
Rather than go buy more boxes that don't have dividers,
I removed the slats from all of the crankbait boxes I had.
I went to the local supermarket and
bought large bags of sturdy elastics.
I was amazed at how many baits fit in a box,
once the hooks are wrapped up.

Now, I buy single-tray boxes only for all of my hard baits.
Crankbaits, jerkbaits, topwater poppers, floating Rapalas, etc.
are all stored this way. I can carry a lot of baits in not much space in the boat.


Thank you for reading.
If you are looking for good deals on some of these products and more,
you can follow the links below to eBay,
Amazon and one of my favorite tackle outlets, Monster Tackle.

Popular posts from this blog

The Perfect Rod and Reel Set Up for Fishing Senkos

Using a Kistler Z-Bone Rod to catch big bass with weightless Senkos  I remember the first time I saw someone fish a Senko . I had heard of them and thought how could a piece of plastic that looks like a Bic pen catch fish. Big mistake. I got out fished like nobody's business that day. Even then I wasn't totally convinced that they were that good. A few years ago, I was fishing Amistad in Texas. I was really struggling; then I saw a bag of Senkos in my boat. 'What the heck,' I thought. I put one on. We went back through the same area again and the Senko just clicked. Now Senkos are my go-to bait. By far, the best fish-catching bait I use. I have so many Senkos. From 5-inch to 7-inch. My favorite is the 6-inch Senko. It casts very far and it is heavy enough that I can also pitch it to cover. (Unfortunately, my favorite color is no longer available in the 6-inch size.) You can never have too many Senkos. When I'm struggling to catch fish, I have to fa
Read more

How to fix: marine bilge pumps, thru-hull fittings, and more

Does your bilge pump seize up? Here's a trick. DYI bilge pumps and leaking thru-hull fittings Over the years, I've had bilge pumps seize up because debris or worse, fishing line, ended up wrapping around the impeller. Bam! No working bilge pump. It happened once when I was in a huge downpour on Sam Rayburn Reservoir. Not only was I taking on water from the rain, but it was super windy and waves were crashing in the boat. We had so much water come in, we could not get on plane. No working bilge pump either! If I had ordered the boat new from the factory, I would have had a second bilge pump installed. (I highly recommend this.) As it was, I bought the boat new from dealer's stock. (See my earlier blog posts about my boat-buying quest.) We had to idle in; we barely made it. After the trip, I replaced the bilge pump. It worked great, but I still had a leak. Here I go again — take everything out so I can get to the the bilge area. Got to find that leak. To get to
Read more

--> The best truck bed cover options I decided not to go with a truck shell. Sometimes I need to haul taller objects that don’t fit under the shell. For the same reason, I didn’t want a hard tonneau cover (although they look really nice when matched to the same color as the vehicle. The remaining options are to get a bed cover. So many different choices. But I choose to not let the cost be the determining factor this time. I didn’t feel a fold up cover would be secure because there are so many break-ins around boat ramps anymore. Thieves figure our unattended trucks are an easy target. Even with an alarm, you’re out of earshot once you leave the dock area. So, I like the retractable bed covers. My previous truck was a GMC Sierra 1500 On my previous truck I had the Roll N Lock. It worked well. I choose that one because it looked like the best option that was displayed in the local truck accessory shop. Roll N Lock Truck Bed Cover The Roll N lock served me well and I
Read more