I'd rather be lucky...than good. Rookie mistakes.

October 21, 2015
I've used that saying so much in fishing. See, if your lucky, you can explain away a good day even when it was comedy of errors. For those of you who are good, well, you have to be good all (most) of the time.

You know how it is when you have a bad day. You break off a fish. You have multiple backlashes in a row. You miss a good fish cuz you were daydreaming, etc. You finish just out of the money.

In my last tournament, right off the bat, I hooked a big fish on a spinnerbait. It was still pretty dark so I couldn't see the fish. I felt it go down in to the grass and hang up. I thought it was off because I couldn't feel anything.

I gave it some slack and it swam out. We netted it and then I realized how big it was (23 inches). Nice start! With a limit I could have a high place finish. That was lucky. 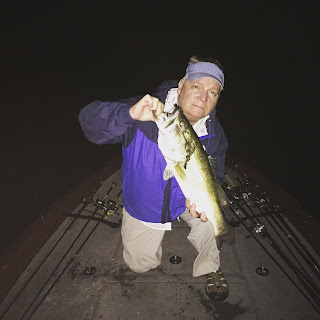 Finally, I got it untangled from the net. I checked my line and somehow the line had slipped up the R-bend of the spinnerbait up into the swivel and blade. Rookie mistake. And, the line didn't break. But the line was very shredded for about a foot. Why didn't it break? Lucky.

I cut the line and tried to retie while the fishing could still be good. But I couldn't see in the low light to retie. It was still too dark for my eyes. It took like 10 minutes to retie. I made few more casts, but by then it was pretty light.

I changed to a frog because it had been working for the last few months. I get a big fish to suck in the frog — hardly any noise. He just slurped it under. I set the hook but nothing happened. My line peeled off. Nothing. I don't feel the fish. Oh. Oh.

It was a brand new rod and reel I spooled up with 65-pound braid the day before. I forgot to set the drag. Rookie mistake, again.

All I ended up with was a frog stuck in lots of grass.

I continue throwing a frog but no more hits. My partner (my son) started using a weightless 5-inch Senko. He smoked three good keepers in a short time. I'm still on that one fish. Of course, my one weighs more than his three.

I switched to the Senko, but the wind was blowing a little hard. I couldn't feel the Senko down in the grass like it needs to be. I change to a 6-inch Senko. Boom. Get one. Then another. This is turning into a good day.

Bouncing from the Senko to the frog and back isn't working. Hey dummy, stay with the Senko, I convince myself.

What was that? Set the hook. Fish number four is in the boat. Lucky.

As we're drifting around some matted grass, my son spots a fish on a mat with it's back out of the water. Must be a gar I'm thinking. But no, it's too compact for a gar. It swims off toward deep water (we're in three feet of water so it isn't going far).

I toss the Senko out in front of where it might drop to. I wait and wait. Nothing. But I set the hook any way. Fish on. Fish number five. Done. Limit. Lucky. And I have a little more than 20 pounds. Six hits and five keepers. Wow. Lucky.

And there are several hours left. We go all over. Nothing.

Run into a couple of guys fishing the tournament. One has 19 pounds and the other around 20 pounds. They tell us one guy has about 24 pounds. So, my day isn't all that great after all.

I want to try something different but we only have 10 minutes to fish.

When loading the rods at 3:00 a.m. I grabbed the wrong rod. I saw a blue fleck worm rigged and thought I had the 7-inch worm rod, but no I had grabbed the 10-inch worm rod. I realized that soon after first light. I was ticked at myself. Rookie mistake.

Well, 10-minutes left. Not much I can do. I run back toward the ramp and hit a deep point that drops to 30 to 50-feet. I've run by this point hundreds of times, but never stopped. I pull up and grab the 10-inch worm rigged on 20-pound line with a half-ounce sliding sinker. (It was rigged from my last trip to Lake Falcon.) But it was the rod I had grabbed by mistake that morning. Oh well, I've got nothing to lose at this point.

First cast, I bounce it back toward the boat, fast. Tick. Fish on. I cull up 1.5 pounds.

Final tally. Second place with nearly 22 pounds. I'd rather be Lucky than Good.


Hey guys, help me out by clicking these links when you need to make purchases on Amazon or eBay. Thanks in advance.

Popular posts from this blog

The Perfect Rod and Reel Set Up for Fishing Senkos

Using a Kistler Z-Bone Rod to catch big bass with weightless Senkos  I remember the first time I saw someone fish a Senko . I had heard of them and thought how could a piece of plastic that looks like a Bic pen catch fish. Big mistake. I got out fished like nobody's business that day. Even then I wasn't totally convinced that they were that good. A few years ago, I was fishing Amistad in Texas. I was really struggling; then I saw a bag of Senkos in my boat. 'What the heck,' I thought. I put one on. We went back through the same area again and the Senko just clicked. Now Senkos are my go-to bait. By far, the best fish-catching bait I use. I have so many Senkos. From 5-inch to 7-inch. My favorite is the 6-inch Senko. It casts very far and it is heavy enough that I can also pitch it to cover. (Unfortunately, my favorite color is no longer available in the 6-inch size.) You can never have too many Senkos. When I'm struggling to catch fish, I have to fa
Read more

How to fix: marine bilge pumps, thru-hull fittings, and more

Does your bilge pump seize up? Here's a trick. DYI bilge pumps and leaking thru-hull fittings Over the years, I've had bilge pumps seize up because debris or worse, fishing line, ended up wrapping around the impeller. Bam! No working bilge pump. It happened once when I was in a huge downpour on Sam Rayburn Reservoir. Not only was I taking on water from the rain, but it was super windy and waves were crashing in the boat. We had so much water come in, we could not get on plane. No working bilge pump either! If I had ordered the boat new from the factory, I would have had a second bilge pump installed. (I highly recommend this.) As it was, I bought the boat new from dealer's stock. (See my earlier blog posts about my boat-buying quest.) We had to idle in; we barely made it. After the trip, I replaced the bilge pump. It worked great, but I still had a leak. Here I go again — take everything out so I can get to the the bilge area. Got to find that leak. To get to
Read more

--> The best truck bed cover options I decided not to go with a truck shell. Sometimes I need to haul taller objects that don’t fit under the shell. For the same reason, I didn’t want a hard tonneau cover (although they look really nice when matched to the same color as the vehicle. The remaining options are to get a bed cover. So many different choices. But I choose to not let the cost be the determining factor this time. I didn’t feel a fold up cover would be secure because there are so many break-ins around boat ramps anymore. Thieves figure our unattended trucks are an easy target. Even with an alarm, you’re out of earshot once you leave the dock area. So, I like the retractable bed covers. My previous truck was a GMC Sierra 1500 On my previous truck I had the Roll N Lock. It worked well. I choose that one because it looked like the best option that was displayed in the local truck accessory shop. Roll N Lock Truck Bed Cover The Roll N lock served me well and I
Read more